DR Congo:
Support us to amplify the voices of victims of international crimes in court

Policy Brief : Reflexions on victim’s participation before the International Crimes Division in Uganda

Victim participation is a central element in achieving justice and reconciliation in Uganda. The practice is allowed by the International Crimes Division (ICD) but efforts still have to be made by courts and the legislator to actualize its full use in court proceedings. This policy brief offers an analysis as well as a few recommendations regarding the situation of victim participation in Uganda.

The concept of victim participation is a relatively new aspect in Uganda’s common law system, where victims traditionally have no role in criminal court proceedings. The Rules of Procedure and Evidence (RoPE) of the International Crimes Division (ICD) are an exception in that regard, as they allow victims of international crimes to participate in the court proceedings. However, the Rules are silent on how such participation should be operationalized. Relying on close monitoring of Thomas Kwoyelo’s case at the ICD, interactions with the victim communities and study of the relevant legislation, this policy brief provides an analysis of how victims have been participating in the court proceedings since the adoption of the RoPE and highlights the challenges that have been encountered so far in the process. Among those challenges, we note the absence of clear guidelines for participation of the victims in proceedings and the lack of resources dedicated by the Court to ensure such participation. The Court has so far taken a reactive approach which has made it difficult for the victims’ lawyers to make participation meaningful. The physical distance between the victims and the Court and lengthy proceedings further contribute to the loss of interest and fatigue that have been growing among victims. Besides the necessity for the ICD to develop guidelines on victim participation to address those issues, there is an urgent need for the Justice Law and Order Sector (JLOS) to come up with a proper victims participations strategy and to ensure financial support to the ICD and the victim lawyers.

The policy brief also puts forwards a few observations and recommendations regarding reparations. Reparations are a central issue for the victims and a main motivation for their participation in the proceedings. The possibility for the court to order reparations upon a guilty verdict is foreseen under the RoPE. However, important questions remain unanswered and call, once more, for guidance from the ICD. For example, it is unknown whether or not victims who are not participating in the proceedings will be entitled to reparations, and what the actual modalities of court-ordered reparations, if ever awarded, would be. Additionally, the scope of reparations under the RoPE lays emphasis on financial compensations, mismatching victims’ own preference for other forms of reparations. Beyond court-ordered reparations, there is a need for the legislator to work on a country-wide reparations framework that provides victims with clear perspectives to address their grievances.

Victims’ participation is an important element in court processes especially among the victims that were affected by post conflict in Northern Uganda.  This greatly contributes to justice, healing and reconciliation among others. It also makes the victims feel part of the processes in achieving justice for the harm that they suffered. It is therefore important that the different stakeholders ensure that this concept is actualized to avoid instances of the victims losing interest in the court processes.

Published in Access to justice and development | News | Uganda

12 April 2021 Patrick Henry : “In a growing number of countries, the very notion of human rights is being challenged.”

31 March 2021 Between walls – Omar Ben Amor (Art Acquis) : “Access to culture to every detainee at any time”

18 February 2021 JUSTICE NOW ? Tackling legacies of Europe’s colonial past in the wake of Black Lives Matter

9 February 2021 Between walls – Walid Bouchmila (Horizon d’Enfance) : “When you make a project in prison, you really have to think of everyone”. 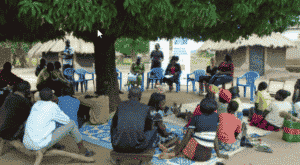