Reparations at the core of transitional justice in Uganda

Kampala, 25 January 2017 – ASF releases two publications on reparations for victims of mass crimes in Uganda. They aim at assisting all stakeholders dealing with reparations in the country and, particularly, victims, their counsels and the judges of the International Crimes Division. They will also give a new kick-start to the transitional justice process. While reparations are only one component of this process, they may serve as an “icebreaker” to open the door for the implementation of other measures including truth, justice and reform.

Since 2007, the Uganda government engaged into a process of transitional justice, with a view to promote truth about past violence, justice, reparations and guarantees of non-recurrence. This process is considered as paramount to as successful and sustainable recovery for a country plagued by violence and conflicts since its first post-independence government in 1962. Particularly, the conflict opposing the government of Ugandan to the Lord’s Resistance Army (LRA) between the 1990s and 2006 stills deeply marks the society and areas in the Northern of the country.

In 2015, the Justice Law and Order Sector* presented its 8th version of a draft national transitional justice policy to the government. This document remains to be adopted as well as reparation programs. During the same year, the International Crimes Division (ICD), a division of the High Court mandated to try those responsible for genocide, crimes against humanity and war crimes, opened its first trial against former LRA warlord T. Kwoyelo. For the first time in the history of Uganda, victims are entitled to claim reparations in criminal proceedings for the harm they have suffered.

“In this context, reparations remain a very much unchartered area in Uganda”, explains Ms. Patricia Bako, ASF Program Officer in Kampala. “Practitioners at the ICD have recognized the novelty, and thus challenges, in dealing with court-ordered reparations. In addition, the Ugandan authorities will soon be confronted with the challenge to grant reparations at a national level. These issues are even more crucial at this time where Uganda seeks to strengthen its economic and social development”.

“We believe that these two complementary publications will be of great importance to the different stakeholders working on the areas of reparations in Uganda”, adds Ms. Bako. “We are confident that they can contribute to stimulate discussions around reparations, but also more largely around transitional justice in Uganda.”

Since 2013, ASF has been implementing a project aimed at promoting processes of national accountability for mass atrocities in Uganda, with support from the European Union and the MacArthur Foundation.

* A governmental body mandated to develop a holistic approach to improving access to and administration of justice.

12 April 2021 Patrick Henry : “In a growing number of countries, the very notion of human rights is being challenged.”

31 March 2021 Between walls – Omar Ben Amor (Art Acquis) : “Access to culture to every detainee at any time”

18 February 2021 JUSTICE NOW ? Tackling legacies of Europe’s colonial past in the wake of Black Lives Matter

9 February 2021 Between walls – Walid Bouchmila (Horizon d’Enfance) : “When you make a project in prison, you really have to think of everyone”. 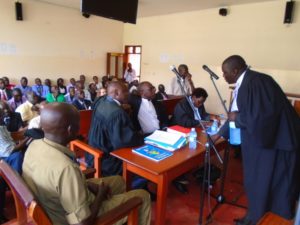