DR Congo:
Support us to amplify the voices of victims of international crimes in court

Kinshasa, Democratic Republic of the Congo – 27 February 2015 – Following today’s publication of the judgment by the Bukavu Garrison Military Court, Avocats Sans Frontières (ASF) welcomes the decision to condemn Kizima Lenine Sabin, war lord  in the Democratic Forces for the Liberation of Rwanda (FDLR), to life imprisonment for crimes against humanity. This decision demonstrates a real will on the part of the Congolese justice system to combat the impunity of war crimes and severe violations of human rights committed by armed groups within its territory. The NGO welcomes the fact that financial compensation has been granted to most of the 487 victims for whom it provided support during the case.

The Rwandan warlord Kizima Lenine Sabin, who bears the title of Major in the FDLR, has been found guilty of crimes committed between the end of 2009 and the start of 2012 against the population of the region of Shabunda in the province of South Kivu. The Court upheld six charges: murder, rape, torture, pillaging, arson and extortion.

During the proceedings, victims spoke of how they were abducted and treated as slaves; women and minors were raped, and some suffered severe breaches of their physical integrity with long-term consequences. “We were treated like animals, as if we had no rights […] Kizima Lenine acted as if he had the power over everything […]“, one of the victims stated during the proceedings.

ASF welcomes the decision made by the Court of Bukavu to hold a mobile court hearing in Shabunda. “This allowed the Court to get a better idea of the crimes committed on the ground; whilst victims were able to participate actively in the proceedings“, states Innocent Cokola, Project Assistant for South Kivu. A total of 487 persons were classed as civil parties with the help of two lawyers from the ASF pool, and 83 appeared before the hearing.

The Court of Bukavu holding a mobile court hearing in Shabunda.

Of these 487 persons, 454 benefited from a ruling ordering Kizima Lenine to pay them damages and interest in the form of financial compensation: $10,000 for the victims of murder, $5,000 for the victims of rape and $3,000 for those having suffered acts of torture and other inhumane treatment. This recognition of the victims’ right to redress is essential to restoring peace in the region and to securing a future for the affected populations.

“Many of the victims have lost everything, and others have been left disabled. Given that the perpetrators of the crimes are most likely bankrupt, however, will the victims ever actually receive this compensation? The government, with the support of its partners, should come up with an alternative solution, such as the creation of a specific redress fund. That would give meaning to the whole justice system“, notes Dominique Kamuandu, International Justice Coordinator for ASF in the Democratic Republic of the Congo.

Josselin Léon, Head of the ASF Mission in the DR Congo, adds: “There cannot be peace without truth, nor without justice. The fight against the various crimes and violations of human rights committed by armed groups must go on“.

Since the judgment was rendered by the Court of Bukavu on 29 December, Kizima Lenine Sabin has lodged an appeal against the ruling. 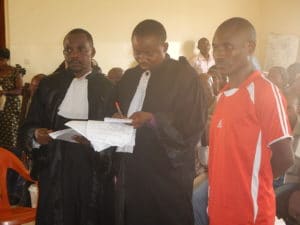